After writing this I realize some of it is a bit grim, but I’m going to go with it anyway as it captures the grind that goes with training for a big competition.

My last hard week of training is now done and it certainly was the toughest. Over the last two months there were a handful of times I had to drag myself into the pool, but this week it was really a struggle to get in for some of the sessions.

Training for this compared to Budapest has felt a lot more draining and I am physically just hanging in. Rotator cuffs in both shoulders are niggling, but full blown injury has so far been avoided. I’ve had to be very proactive in this area, using hot packs, physio appointments, anaerobic kick sessions followed by rest days to maximize the rest for the shoulders. It also meant severely reducing the amount of Fly I swim, so much so, that I’m a bit worried about how I’ll cope in my 100m Fly on race day. On the plus side I’ve really had to focus on technique as anything incorrect or sloppy will hurt.

On top of this I picked up a slight sore throat two weeks ago and as usual this is being followed by a slight cough. Nothing too bad so far, just a slight annoyance. Its three weeks to my first race and I’m hoping the reduction in training will help me recover in time.

On the plus side I’ve hit “race weight”, its something I’ve noticed over the last few years. When I push training up before a big competition I usually drop down to 74kg or less, I’m currently on 73kg. I haven’t been able to get to the tanita machine in the college gym, but from previous uses with a PT it estimated that at this weight I’m probably about 10% bodyfat. This is good for two reasons; 1 Its going to be easier to squeeze into my racing suits, 2 I’ll at least look the part in pictures of the competition.

One of the ways all of this training affects you is how you feel in the water. I had hoped to be going off faster repeat times, but it hasn’t really happened. My times aren’t bad, if I were doing these any other time of the year I would have been happy with them. Plus its easy to forget that I’m doing more repetitions in my sets than I would have back in March and I’m training more times per week than I would at any other time in the year. On top of all of this I was doing two anaerobic sessions per week for July and this week had three, so my body is also trying to recover from those sessions while still working aerobically.

All of this training also leads to “odd” situations where I feel completely dead and heavy in the water, but I’m pulling out decent times. Especially in race pace or threshold work. Of course there are simply “dead patches” where things just aren’t working, on these days I just have to focus on the goal of the session and push through it.

It also has had an affect on life outside of the pool, I’m jealous of professional athletes that get to just go home and rest after training. Work, family life, and a project I signed up for are all a lot harder when you’re feeling exhausted and are thinking about the next session you’re about to do or about sleeping. 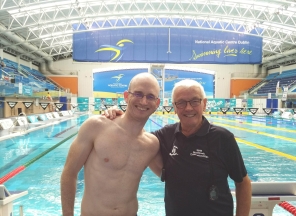 Earlier in the year I had planned on going to Limerick’s 50m pool throughout the summer. Unfortunately this pool has been closed for repairs during the summer, so my only option to train in an Olympic pool is to go to Dublin, which is over three hours drive away. So not exactly the easiest thing to do. Thankfully the Development Squad that I mentioned in a previous article scheduled three training sessions over the summer, which gives me an excuse to go up. I was unable to make the first one, but the second one was hard. A combination of a heavy week training + driving up that morning + not being used to the longer pool, really took it out of me. While I was horrified at the state of my fly, my pacing for the backstroke, breaststroke and freestyle was good considering it was only training pace. I’m pretty positive that my race pace will also be on track during the meet.

We also had a go a diving from Olympic blocks. I’m beginning to see a common theme with my dives from these blocks. My first 3-5 will all go wrong, too deep, too shallow, but then things will click and I will nail them. This was fine earlier in the year when I had 30 minutes to practice on them before the Irish Masters, but if I’m in the same situation in Slovenia that I was in Budapest then I’m just not going to risk it and will go back to my older conservative dive.

So all in all, while I am feeling half dead at this point, but there is a psychological boost from completing the heavy training. I am both looking forward to taper and worried about it. I find taper tricky to get right. I have the basic plan worked out, I just need to fill in the pieces. Bit like my life in general really.