The counter in the sidebar of this website shows how many days to go until the European Masters in Slovenia. While I am a little bit behind where I would like to be, I am still on track and I have started to increase my number of training sessions per week. This post will give a recap on the Masters Irish Open and my training to now.

I had worked on a mini-peak and taper for this competition and it paid off. I also made sure to go to the pool for a warm up session on the Friday night of the gala to get used to the blocks and the pool, and it’s a good thing I did.

On the Saturday I was in the first event, the 400m free. I was nervous about getting the pacing for this right after my disastrous attempt in Tralee. I had what I thought was a fool proof plan. The guy next to me was entered as a good 10 or more seconds faster than me, so I figured if I kept within a certain distance to him, and away from the person next to me, then I should get a good time. The race felt tiring, and it was hard to figure out how I was doing. When I hit the wall I was shocked, I’d added 5 seconds to my long course time, the person next to me had added so much that if I had gotten a PB I would almost have beaten him. 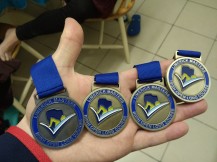 That race did show me something though, I picked up a silver, but the swimmer that beat me was off form. After a chat I found out he had been awake for over 30 hours flying home and had entered a lot of races. Added to that, the other swimmer that was a bit faster than me didn’t even show up. So due to a combination of swimming well, and more importantly luck that others didn’t swim well, I ended up having my best ever result for this competition, three gold and one silver.

I tried opening up a bit faster earlier in my 200m free and it paid off with a lifetime PB, which brings me another second closer to my goal time for Slovenia. I didn’t have much anaerobic work done, my turns could have been snappier, and I think I could let loose earlier in the race, so I should be able to take at least another second off. My 100m went well, but watching footage back I had, without realising it, taken a huge breath after my turn, clearly, I had lost my focus for the break-out. I also ended up going to the side up against the lane rope, I think this is partly because the shallow end of that pool had lost its markings for the centre (it was painted on and has faded off). My time was still good, a half second faster than the same gala last year, so hopefully this will also be faster once I hit Slovenia. My final event was the 200m Back and I really just wanted to have a go at an event I had never swam before. I enjoyed it but was tired as it was close to the 100m and we had no warm up pool for me to cool down.

My coach told me to take two weeks off before starting my training cycle for the Europeans, so I did. Of course, I still exercised by cycling and running. After my first week back in the pool I ended up picking up a sore throat and a chest infection. I got a few days in here and there, but I missed another week or two of solid training before I was finally able to train consistently again. I’m now bumping up my numbers in terms of sessions per week. My times are a little off what I would expect, but I’m not worried because the volume of work is increasing. My ideal work week would be 7-8 swims and 1 (if not 2) gym sessions, which was easy to do this week when I was off for 4 days. Doing this on other weeks is going to be tricky to plan. As a masters athlete I don’t have any regular club sessions (my masters club only trains twice a week and is finished for the summer), so I have to try and get in for the pool’s lunch time lane swim or for their evening sessions. The problem is on weekends they only open 10-6, so I might have to only train once on a weekend and take a weekday off to break up the week. I write and plan my weekly training, but I do work with my masters club coach, who is also our junior club’s head coach, to work out my overall plan for the training cycle. He advised me on how many anaerobic sets I should be doing per week and when I should be doing them. I’m not confident on taper planning, so I will be asking him a lot of questions in August.

I haven’t been enjoying my 400m freestyle races, to be honest with myself I’m not sure I ever enjoyed racing it at masters level. However, it has always been an event I did well in and when I looked at my London 2016 time compared to the results in Budapest 2017 I realised that I would have been ranked around the same as my 200m. So purely for a good ranking and to see how fast I could go, I entered the 400m free for Slovenia. It was a hard choice because the 200m IM is the same day, while I’m not great at the IM, I really enjoy it. I had only used up 4 of my events for the Europeans so I adapted my entry and added the 200m IM as my fifth event. 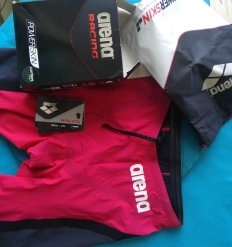 I take care of my carbon racing suits, but five events in one week with only two suits seems a bit much, so I bought another one. This time I upgraded a bit, or rather, a better suit came down into my price range. I managed to snag a relatively cheap Arena Carbon Flex and picked up an entry level Arena Powerskin St 2 as well for the regular season galas. I’m thinking of picking up one of the new race hats, if I can get one in green, but as ever I never know if this is my last time in one of these competitions, so I might just stick with the basic Ireland hat we are given.