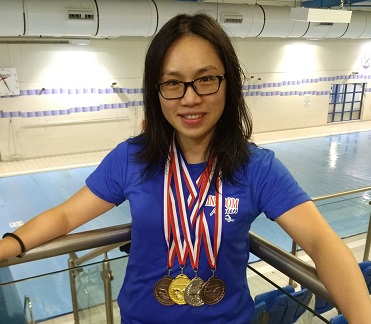 Now that Jia has actual entry times for some events, and isn’t just going in as NT, she is no longer in the first heat for everything. This gala saw her make another goal, to swim 100m IM in competition and she did well earning a bronze. Her butterfly leg looked so good, we have now considering adding 50m butterfly to her goals. 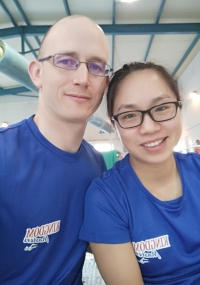 Her 100m Freestyle saw her knock off four seconds off her previous time and earn a bronze. This bronze didn’t come easily as she had to keep off some tough competition, beating the fourth-place swimmer by a second. Her technique for the 100 was good as she maintained long smooth, strong strokes for the first 75m. Things went a bit awry for the last 25m, but this happens at this distance and we are only 6-7 months into this project.

The 50m Breaststroke saw another PB with Jia knocking off a second from her mallow time. We don’t do much Breaststroke training because of her knees, and she prefers the other strokes. It was also getting late in the day and was her third event, the first two being quite tough for someone at her stage of training, so this was a good result. Even better she won gold!!! Beating the next swimmer by quite a bit.

The 50m Freestyle was the last event of the day, the gala had started at 12 so it was now just before or after 7. There was only one event between the 50m Breaststroke and the 50m Freestyle, and that event only had 3 heats. This all took its toll on Jia and it started to become visible with 19m to go with the last 5m getting very very tough. Jia could only equal her previous time, which is pretty good considering it had been a long tough day, plus she held her technique for the whole race. Unfortunately, in the results she was in the middle of the pack and missed out on a medal, to make things worse the swimmer she beat by a second in the 100 beat her by a second in the 50. Shortly afterwards she took part in her first ever relay and won her fourth medal of the day, a silver.

This competition has changed everything, Jia is no longer simply taking part, she is competing, she is moving up the rankings, moving up the heats, beating people, winning medals, making PBs. The best thing about all of this is that we are only 6-7 months in, there is still a lot more to come.

We hit an important milestone in training with Jia now being able to complete 10x100m off 2:15, by June she should be able to do 6×100 off 2:10. By Christmas, if everything goes well, those should be off 2:00. Currently she is able to do sets of 50s off 1:05, so it is really only a matter of time. Jia has also told me she is starting to catch other swimmers in the public lanes when doing freestyle or butterfly, this is a very visible sign of her improvement.

After all of that, we are now two days from the rescheduled Irish Masters gala. This will be Jia’s first time racing long course so it will be interesting to see how this affects her times. It’s also going to be her first time swimming 100m Breaststroke, but importantly, its going to be a fun day out and we will enjoy it as much as possible. This whole project is a journey after all.