I only had one event on my third and final race day, the 100m freestyle. This was my best event when I was a junior swimmer, although in hindsight if I had more opportunities to swim the 200m free then that might have been my best. This was the event that I put a lot of focus on in Budapest, and the event that turned into a nightmare there. So, coming into this I had a lot to prove, I had more anaerobic work done, more stoke work done and my breathing pattern down. This with the fact that I had done well in the Irish Masters Open in this event, made me believe that this was going to go well. 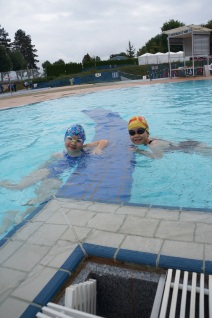 The swim was on in the afternoon, so I got to relax in our apartment, before leisurely strolling over to the pool with my youngest daughter. She played in the outdoor play pool while I went into the indoor warm up pool. In Budapest things had gone wrong from early in the day, and while it meant I fatigued too early, the part that was hardest to take was the messed-up dive. I have learned three things on dives which I now put into practice in Slovenia: 1 always get practice dives done in new pools, 2 do a number of dives until you are consistently nailing them, then stop, 3 don’t over think the dive, try to make it an instinct by trusting yourself. So, in that warm up pool I dived until I was consistent then stopped. I was able to enjoy the sun with my family until it was time to suit up and head for the call room. 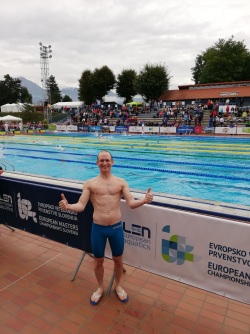 I went through all my pre-race warm ups and rituals and stood behind the blocks. I had a rough target time in mind, or to be more specific, I knew what time I wanted to be under. From the start list I reckoned that I would achieve this if I won my heat, which meant that was going to be my other target for this event. I got on the blocks, excited and gunning for the race. I then had probably my best start ever, I hit the water at a fantastic angle and speed. My streamline and breakout went as well as I could have hoped, I felt like a torpedo. I was very strict on my breathing pattern and forced myself to breath even though I felt I didn’t need it. One curious thing was the shape of the water around my face, there seemed to be an extra little wave that I was breathing under. I’m not sure if it was because of the open pool, or my low head or if it wasn’t just a slight splash from a slight breeze, but I was able to breath under it, so I took my chance and didn’t change anything. On my tumble something odd happened, I’m still not quite sure what. I think that in my haste I either didn’t dip down as I normally would, or I was slightly off in my distance, maybe I went in harder than expected. Whatever it was I think my feet went slightly deeper and I was not level. All I know is that I knew something was odd and I knew as I pushed that the angle was going to push me up fast. So I just reacted by going with it, I managed to fit in one fly kick before hitting the surface. I still hit 5m so I didn’t loose anything. I knew coming off the wall that I was first to turn, but for the rest of the race the only person I could see was the guy next to me. I was later told that it was the same german guy that was next to me in the 200m free.

Hang on, and push

That second 50m was tough, I can usually tell where I am in a race by how I feel. At one point it felt that I had 20m or less, but when I took a sneaky look forward, I realized I was probably 30m away from the wall, uh oh. This is when the anaerobic sessions paid off. I had to trust in myself and my technique. I had to just focus on not letting up, even though my body was screaming. It’s a curious thing to have your body seem to tempt you to ease up, your muscles feel like they are slowing down, there is an instinct there to ease off, to relax. This has to be fought, you need to push even more, stretch those arms out, pull them all the way back, get them over the top as fast as possible, get them in to the water inline, drive those legs, leave nothing behind. At the last 5m that guy next to me seemed to stop chasing so fast, but for me things started to shut down. My arms and legs felt like they were starting to give out, I hit the wall fearing the worst, that I would only have gotten the same time as I did in March. I managed to look across to see no one else at the wall and heard the announcer call my name. Gasping for breath I heard the timekeepers say something, looking for the board I saw it. Not only was I first to the wall, but I had beaten my time by a second. This was the fastest I’ve ever gone long course, I’m counting it as a lifetime PB because as a junior swimmer I only hit this time in a relay and in short course.

It was a strange feeling climbing out, getting my things and heading for the warm up pool. I was physically in bits, still gasping for air, but I had done it. I had won my heat and gone faster than I ever had before, and my competition was over. I got to chat with my buddy from Scotland/USA (and take a selfie) as we walked to the warm up pool. I got into the warm up pool for the last time, a pool that I swam several km in over the course of the week. It was a strange feeling for it all to be over. On the way out I looked up the results, I had jumped to 15th. Despite how it felt, that second 50 was almost the same speed as the first. There was roughly 2 seconds difference between the two, the dive would account for 1-2 seconds.

I lingered around after I had changed to take as much photos as I could. This was one of my most successful competitions ever, I didn’t win any medals, but it was a higher level than my usual Irish competitions, and I got a bunch of life-time PBs. Not bad for a 36-year-old. I have to commend the organizers; the competition was well run, and the country/town was fantastic. The only real let-down was the lack of a video stream for the competitions, and there could have been more merchandising. Our final full day in Slovenia was spent in the capitol, and the following day we flew home. 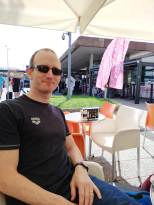 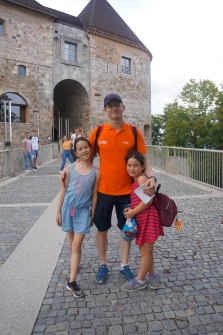