My first day of competition, was a bit of a disaster in hindsight things had gone wrong from the very start of the day. After we had gone to the bus stop for our bus to the Duna arena we realized I had forgotten my wife’s entry ticket, so I went back to our apartment to get it. I did the old walk-run combo, hoping it wouldn’t take much out of me, but obviously it didn’t help. When we got to the arena there weren’t any signs for athletes that I could see and I ended up going in the spectator’s areas and had to come back around to the athlete’s area. Once I entered there it was all a bit chaotic and wasn’t as obvious as London was. I asked where the pools and changing rooms were and was shown on a map and pointed to the changing room. After a little wander around I thought I had everything sussed. At the end of the changing room corridor there was a larger open space with screens all around showing heats. It had a doorway to the training pool with an official and farther up a door to the main pool with another one. Confident I knew the layout I went for my warm up, the warm up pool was a typical diving pool, probably 25mx25m.

It was quite packed, but nothing worse than Irish gala’s. Unfortunately, this is where I made a big mistake, I was watching the clock trying to time my preparation for my race and I did a bit too much. This ultimately made everything worse afterwards. I had to join a long queue for the few bathrooms around and then changed to my tech togs. I was fairly confident when I came out and started going to where I thought the line-up area or call room was. When I got to the large room with screens that I mentioned I looked at the screen with horror, I was heat 94 and heat 91 were racing. I ran to the doorway for the pool and came out…… to stare around at the whole spectacle of the Duna arena. While impressive a sight it was missing something crucial that I was expecting, the next heats lining up, or any sign at all of the call room and other heats. In London and in Irish galas the next 2-3 heats are on deck, here there were just officials. I asked people around me where I need to line up but no one knew. I quickly figured they were coming from the opposite side of the pool, but to get across I needed to pass all the timekeepers. I had to do this by going behind a separator barrier built behind them, this I did going at full tilt. On the other side, I ran to a door to only see an empty room, panic had set in as I realized I had come all the way to Budapest, done all that training and I was about to miss the race I had anticipated the most. An official was nearby and in a panic, I started trying to explain my heat was next to on the blocks as heat 92 was finishing. Thankfully he tried to calm me, walked me to the call room and explained the situation to the lady sorting out the heats. My heat were on the chairs ready to go, and I was told to relax and get ready. I then had to walk out on deck. To say I wasn’t prepared was an understatement, I hadn’t time to listen to music, to have some alone time to focus, to do my warming up routine. You can tell how off form I was by the fact that I didn’t do my usual jumps on the spot behind the block. At this point a sudden thought hit me, while I had practiced my new starts at home, I had never tried them off an Olympic block as the warm up pool in the arena didn’t have any. I quickly considered going back to my old start, but decided that I should go for it, I had it down and had never messed it up. 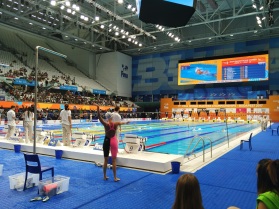 This decision was to cost me dearly. The angle and back step of an Olympic block allows the swimmer to generate a lot more power, this meant that I hit the water faster and at a slightly different angle than I was used to. My coach later told me the fatigue from running around would have cost me on my reaction times. Regardless when I hit the water my arms crossed infront of me effectively acting as a handbrake. By the time I had clawed my way back to the surface I was last in the heat. I then went hell for leather, unfortunately all focus was now gone and my plan of breathing every two with short bursts of breathing went out the window as I regressed to my old style for the first 50. I managed to turn second in my heat on 28 seconds, this would still have gotten me under the minute if I swam the second 50 the way I normally do. However, at this point the lactate started to kick in and I began to pay for all of the adrenaline that had been pumping during my panic, for the manic runs around the arena and for the warm up that went a little too long. I managed to hold on to my position as second, but it was hell as I felt my limbs slowly give out as the length progressed. The last 5m were especially bad, I hit the wall and simply shouted a curse. I looked at the scoreboard and felt so bad I could have cried, 1:00.20, I hadn’t even broken the minute. I was completely spent and completely devastated. This was the first time I had ever not improved on my end of season competition (nationals, the European masters etc), it was a new bitter feeling. I knew I could have done better, but my own mistakes had cost me what could have been a lifetime PB. When I got out to the area I thought I was supposed to be originally (outside the changing rooms and between the pools) I just collapsed in a chair trying to summon the energy to move. I met the only other Kerry swimmer there, Martha, and told her about it. I headed for the warm up pool for a cool down swim and after changing made my way up to my wife. It was her first time watching me compete in a pool so she thought I had done well.

The arena is amazing so after we ate and had a coffee in one of its cafés we went for a wander around the little park that had been set up outside within the complex. It was exciting to walk around the pop-up food stalls, promotors and sponsors stalls. This was when I made a breakthrough, we met two Irish swimmers and after I had mentioned the lack of blocks in the training pool they told me the outdoor training pool had them. Of course, I made a beeline for the pool and did 6 dives in a row, nailing each one. Now I knew the dive would work, now I knew I could apply it to my other swims. My swim as it was earned me a ranking of 56, could have been worse, but I should have done a lot better.

The afternoon was more enjoyable, we went to Buda castle and took a tour of its history museum. I couldn’t do much as I was still in physically exhausted and needed to conserve something for the next day. – Mike